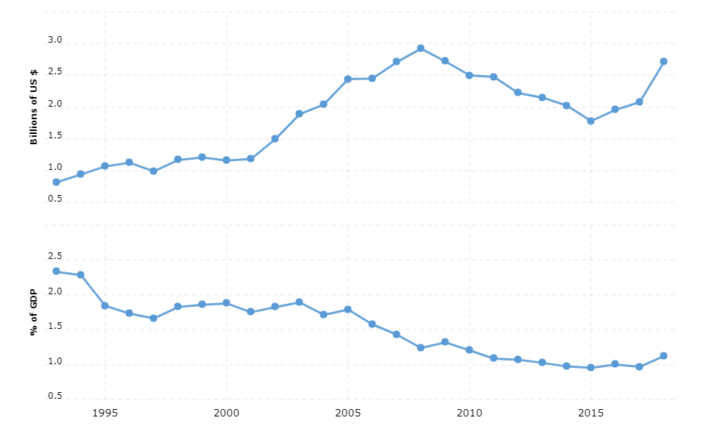 The first cooperation agreement with the EU’s predecessor EC was signed in 1991. However, the country has from time to time been a contradictory member (see Modern history). There is concern that more decisions will be made at EU level in the future. By the UK’s decision to leave the EU, the Czech Republic is losing an ally in its attempts to curb such a development. Many Czechs are worried that the UK exit will strengthen Germany’s position and that it may jeopardize all EU cooperation.

As the Czech Republic joined the EU, the country pledged to join the euro. But both President Zeman and Finance Minister Babiš have advocated that a referendum be held on joining the euro zone, something that most Czechs are likely to vote against, given the state of opinion.

Through the membership of the regional cooperation body Visegrad Group (which includes Poland, Slovakia and Hungary), the Czech Republic has also pressed on to reduce Brussels’ power and return some decisions to the Member States. The Visegrad countries also advocated a hard line during the refugee crisis in 2015.

The Czech Republic has also criticized Russia’s actions in Ukraine, not least the annexation of Crimea in the spring of 2014. The government supported the EU’s decision to impose sanctions on Russia, but questioned whether they would have any effect on Russian policy.

Cooperation with Slovakia sparked some in the 1990s, but the two countries have good relations today.

Between the Czech Republic and Germany there are disputes from the time around the Second World War. This applies to damages for Czechs who fell victim during the Nazis’ occupation and claims for compensation for property seized by the Czechoslovak state from Sudanese after the war (see Modern History). In 1997, the countries signed a disputed declaration of reconciliation and deplored the abuses committed. However, it contained no settlement of damages. In 2005, the Czech government officially apologized to the anti-Nazi Sudanese persecuted and deported to Germany after the Second World War.

Relations with Germany, Hungary and Austria deteriorated in 2002 when the three countries demanded that the so-called Benešec Decree (see Modern History) adopted after World War II be abolished before the Czech Republic was allowed to become an EU member. Among other things, the decree guarantees impunity for abuse in connection with the expulsion of up to three million Germans and about 30,000 Hungarians after the war. The EU succeeded in rejecting the claim, but the problem remained and came to delay the EU Lisbon Treaty in 2009.

In 1949, the Czech Republic became the third country to recognize the People’s Republic of China. During Václav Havel’s time as president, contacts between the countries cooled down, not least because Havel was a personal friend of the Tibetan leader Dalai Lama. In recent years, the Czech Republic has again approached China, among others in the hope that trade between the countries will increase.

Liechtenstein’s then princely family also got property confiscated after the Second World War, through the Beneš Decree. In protest against this, the Principality refused to approve the Czech Republic as a sovereign state after the split. In 2009, however, Liechtenstein agreed to resume diplomatic relations with the Czech Republic.

Relations with Austria have been complicated by protests against the Czech nuclear power plant Temelín near the Austrian border.

Canada reintroduced visa enforcement for Czechs in 2009. The reason was that, for two years when the visa requirement was abolished, it has received thousands of asylum applications from Czech citizens, most Roma. According to the European Commission, it was Canada’s fault to treat an EU country this way and it appealed to Canada to allow the Czechs to enter the country again freely. The visa requirement was lifted in 2013.

Since 2005, the country has a purely professional army. Czech soldiers participate in peacekeeping missions in the Balkans and in Mali. In early 2017, the Czech Republic also participated in operations in Iraq (including a field hospital) as well as in the NATO-led Resolute Support Mission in Afghanistan, whose purpose is to train, advise and otherwise assist Afghan forces.

As a member of NATO, the Czech Republic participates in and monitors the airspace of the Baltic countries that lack their own air force. In 2014, the Czech Republic spent about 1 percent of GDP on defense. However, the government parties have agreed that it will increase to 1.4 percent by 2020.

The Czech Republic contributes troops to the EU rapid response forces and together with Poland, Slovakia and Hungary form the Visegrad Battlegroup. The country has also promised to send soldiers to Estonia and Lithuania as part of NATO’s strengthening of the defense of the Baltic countries.