With a total population of 197,790, the city combines the multifaceted possibilities of a big city with the typical American “small town” charm and offers numerous leisure activities in summer. Whether for a longer stay or as a stopover on a road trip along the US east coast – Richmond surprises with an unexpected variety and is only about two hours by car from Washington DC.

Virginia was one of the southern states that left the Union during the Civil War from 1861 to 1865 and merged to form the Confederate States of America (CSA). Richmond , in particular, was fiercely fought during the Civil War as it was chosen to be the Confederate capital. After falling to the Union Army at the end of the war, Abraham Lincoln visited Richmond. The city was badly damaged by the war. However, some historic quarters have been preserved.

Virginia was one of the southern states that left the Union during the Civil War from 1861 to 1865 and merged to form the Confederate States of America (CSA). The city of Richmond in particular was hotly contested during the Civil War as it was chosen to be the Confederate capital. After falling to the Union Army at the end of the war, Abraham Lincoln visited Richmond. The city was badly damaged by the war. However, some historic quarters have been preserved.

The Virginia Museum of Fine Arts in Richmond features more than 23,000 works of art representing more than 5,000 years of human history, including an impressive anthology of modern and contemporary American art and one of the largest Art Nouveau and Art Deco art collections outside of Paris.

The museum can boast of having the most important exhibition of Fabergé works outside of Russia. The exhibition has already been shown on loan in various museums around the world and returned to Richmond in October 2016, where it moved into a newly designed, dedicated museum wing at the VMFA especially for this exhibition.

This valuable collection with 280 objects by the jeweler Karl Fabergé was opened on October 22, 2016. Five of the 52 legendary Fabergé Easter eggs are part of this collection, as are many individual pieces of jewelry that Fabergé created for the tsarist families of Russia in the 19th century. Fabergé’s around 500 jewelers once created over 150,000 pieces of jewelry made of platinum, gold, silver and rare, expensive gemstones – many of the precious stones were melted down, destroyed or sold around the communist October Revolution of 1917. A large part of the current collection in the VMFA is based on a legacy of Lilian Thomas Pratt of Fredericksburg / Virginia, the wife of John Lee Pratt, head of the General Motors car company in the thirties and forties of the last century.

He is considered one of the most famous American authors of his time: the writer and literary critic Edgar Allan Poe . With his crime thriller “The Double Murder in the Rue Morgue” he became the inventor of the detective stories and with gruesome stories like “The Downfall of the House of Usher” the virtuoso of horror taught generations of readers to fear. Poe’s lyrical works such as “The Raven” are also among the most important American poems in world literature. The Poe Museum commemorates the author’s life and work.

Edgar Allan Poe was still a toddler when his parents – both actors – passed away. Poe grew up, separated from his two siblings, with his foster father John Allan in Richmond. Thus the capital of Virginia became the hometown of the writer, who kept coming back to live and work there.

A particularly unusual wedding location: The Poe Museum arranges wedding ceremonies in the museum’s “enchanted garden”, which was inspired by the poem “To One in Paradise” by the writer Edgar Allan Poe – a real experience, not just for Poe fans. And don’t worry, the museum won’t arrange the wedding in the dark style of the Poe stories, it takes into account the individual wishes and ideas of the newlyweds.

The Poe Museum in Richmond was opened in 1922 and provides visitors with various exhibitions insights into the life of Poe, which was shaped by numerous strokes of fate. The career of the failed genius, because Poe enjoyed rather dubious rum during his lifetime, not least because of his addiction to drinking, is outlined. There are also letters, manuscripts and first editions of Poe to discover, including the first print of the story “The Double Murder on Rue Morgue”, published in Graham’s Magazine in 1841. 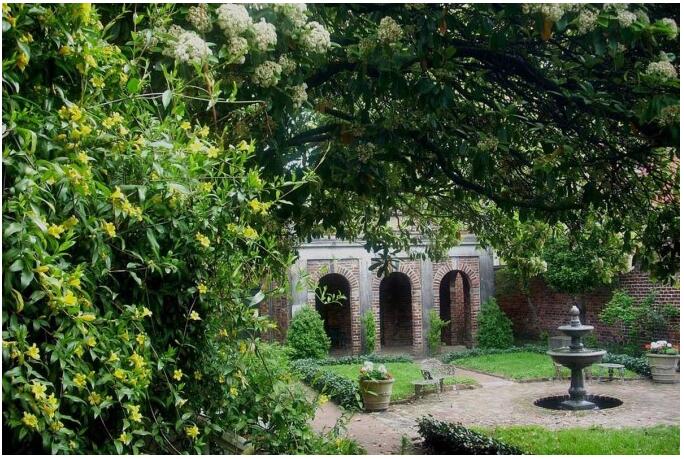 The five-year project was under the creative direction of Art Whino , an American gallery that works with around 1,200 mostly young mural artists around the globe and who also represent a wide variety of styles. This action was preceded by a call to the residents: Anyone who thinks they own a property with correspondingly large walls could contact an advisory board made up of art experts and city representatives via the Internet. He then decided on each individual mural project.

Roller coasters and adventure rides : When Kings Dominion opened its doors on May 3, 1975 as Virginia’s first large-scale amusement park, more than 50,000 visitors flocked to the park. In the first season the park already had more than 1.5 million guests.

In the theme park in Doswell, 20 miles north of Richmond, there are rides like the “Anaconda” – the world’s first looping roller coaster with an underwater tunnel that guests can dive into after a 360-degree loop. “Volcano: The Blast Coaster”, one of the park’s most popular roller coasters, accelerates its passengers to around 120 kilometers per hour. In the “Flight of Fear” passengers are accelerated from zero to over 80 kilometers per hour in four seconds and the “Shenandoah Lumber Company” wild water ride guarantees a lively pleasure.

One of the newest attractions is the “Intimidator 305”, with a height of 93 meters (305 feet) and acceleration to around 145 kilometers per hour, one of the fastest roller coasters in the USA. In 2012 the dinosaur park “Dinosaurs Alive!” Opened, taking visitors back to prehistoric times. There is also a lot for the little ones: Kings Dominion is particularly proud of the nostalgic children’s carousel from 1917. Since 2013, Planet Snoopy has been the world’s largest children’s area in a park, whose rides and attractions have the peanuts as their theme. 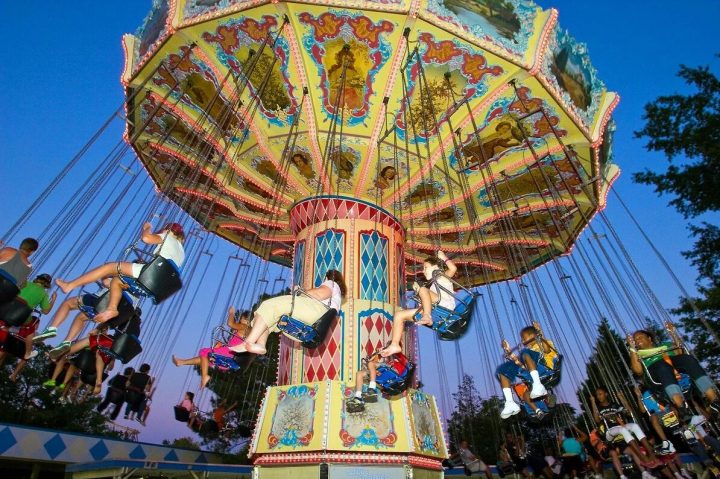