According to abbreviationfinder, Romania is a nation in Eastern Europe. Its capital city is Bucharest. Following the fall of Communist dictator Nicolae Ceauşescu in 1989, Romania’s main foreign policy goal was to approach the western world. Nowadays, the country is a member of both the EU and the NATO defense alliance. Although relations with the EU and the US are most important, Romania has at the same time tried to have good relations with Russia. However, these have been strained after the Russian annexation of the Crimean Peninsula in Ukraine in 2014. 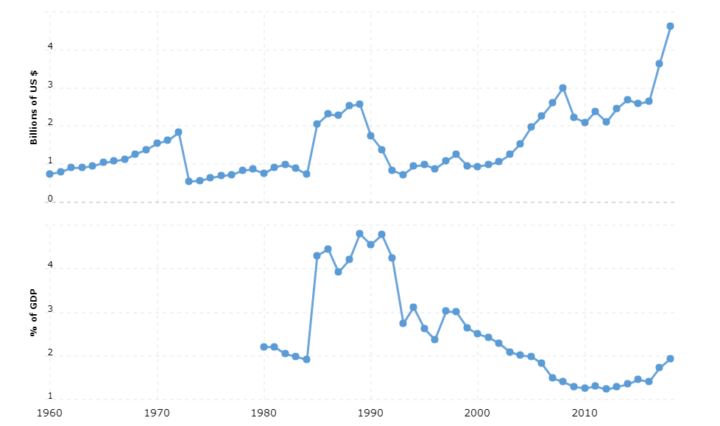 Romania already participated in the NATO Partnership for Peace (PFF) when it was offered full membership of the alliance in 2002. The strong support of the population for membership declined temporarily when NATO bombed parts of Serbia during the 1999 Kosovo intervention. Romania became a NATO member in March 2004.

Approaching to the EU took longer (see Modern History). Only after the EU’s big east enlargement in 2004 did the European Commission announce that there were conditions for Romanian membership in 2007. The country was considered to have a functioning market economy, but there were other shortcomings that needed to be addressed. It was mainly about widespread corruption in the state administration and a weak judicial system. Despite these main shortcomings, Romania, together with Bulgaria, joined the EU on 1 January 2007.

Positive picture of the EU

The European Commission has subsequently repeated the criticism of the corruption on a number of occasions (see Modern History and Current Policy). Corruption is also a major reason why Romania is not part of the Schengen cooperation, in which free movement applies between the member states. The country’s chances of being included in the Schengen area decreased from 2015 when the large refugee flow from mainly the Middle East to Europe made several EU countries reluctant to increase cross-border mobility.

Romania has several benefits from its EU membership in the form of financial support, greater mobility and extensive assistance in the fight against corruption. In 2016, statistics from the EU (the Eurobarometer) showed that 57 percent of Romanians had a “totally positive” picture of the EU, compared with 37 percent in the EU as a whole. Thirty-two percent of Romanians had a neutral view of the EU. On the negative side of EU membership can be mentioned so-called braindrain (when highly educated citizens leave the country for better jobs and higher wages in other EU countries) as well as tougher regulations and increased competition for the country’s farmers.

Approaching to the EU meant that Romania had to resolve tough conflicts with neighboring countries. A dispute with Hungary over the status of the Hungarian minority in Romania is of old date. Following Ceauşescu’s fall, Romania’s Hungarians began to demand increased rights, which was supported by Hungary. An improvement came in 1996 when a cooperation agreement was signed. In this, the countries ensured that they waived all claims in each other’s territories and at the same time guaranteed the rights of minorities.

Romania reacted negatively when Hungary introduced a new law in 2001, the so-called status law, which would give Hungarians in other countries special benefits if they chose to work or settle in Hungary. The Romanian government and the European Commission criticized the law, which in 2003 became less extensive. In the same year, the two countries entered into an agreement based on the Status Act on cultural rights, among other things.

The conflict flared up again in February 2013 when local Romanian government officials in eastern Transylvania prevented ethnic Hungarians from hoisting the so-called szekler flag on public buildings. The flag is associated with demands for increased autonomy for Transylvania, where many Hungarians live. Hungarian members of the Romanian government then supported their right to raise the flag. In March 2014, the Romanian government imposed an entry ban on a number of Hungarian citizens who were members of extremist organizations and prevented them from participating in the celebration of Hungary’s National Day in Romania.

The refugee stream to Europe from the Middle East in 2015 again strained relations between Romania and Hungary. When, in February 2016, Romania announced plans to build a refugee camp near the border with Hungary to house some of the refugees who had taken to Romania, the reactions of the right-wing nationalist government in Budapest became strong. Hungary planned to build a wall against Romania to prevent the refugees from crossing the border. Romania promised to receive 6,200 people in 2016 and 2017 in accordance with the quota system for the refugee reception that the EU has decided on.

Romania previously claimed the right to some areas of Ukraine that the former Soviet Union had undergone. In a 1997 agreement, Romania abandoned these claims. The common land border was formally recognized in 2003, but the boundary around an island off the Danube Delta, where there is oil and natural gas, remained unresolved. The case went to the International Court of Justice in The Hague, which in 2009 awarded Romania eight-tenths of the area in dispute. In 2015, the two countries agreed that Romania should provide medical care to Ukrainian soldiers wounded in the fighting in eastern Ukraine that has been ongoing since 2014.

Romania was the first state to recognize Moldova’s independence in 1991. Then there were thoughts within nationalist circles in both countries of a reunification, but these have now largely been silenced. Instead, governments are advocating economic integration and strengthening cultural contacts. In 2010, the countries agreed that Romania would assist Moldova in its pursuit of EU membership and later that year the two countries could sign a sharply delayed border agreement.

Romania has traditionally had a good relationship with Serbia, although Romania supported the UN sanctions against Belgrade during the civil war in former Yugoslavia in the 1990s. In 1996, the two countries signed a new friendship and cooperation agreement. Romania is one of the European countries that does not recognize Kosovo’s independence from Serbia (Kosovo unilaterally proclaimed independence in 2008).

At regional level, Romania is also a member of the Central European Initiative (CEI) and the Black Sea Economic Cooperation Organization (BSEC).

Concern about Russia’s ambitions in the immediate area

Russia has long expressed annoyance at Romania’s plans to join NATO, but after several years of negotiations, the countries signed a treaty on friendship and cooperation in 2003. A continuing dispute concerns the return of valuable cultural objects and gold bars that Romania asked Tsar Russia to store during the First World War.

In 2010, Romania saw rising concerns about Russia’s activities in Ukraine and other parts of the former Soviet Union. Romania, like other EU countries, withdrew from Russia’s annexation of Ukrainian Crimea in 2014 and joined the subsequent EU sanctions against Russia. The Russian involvement in the fighting in eastern Ukraine led NATO to announce plans to install new posts in Romania to strengthen protection against a possible Russian threat.

Romania also has a conflict of interest with Russia over the influence over Moldova, where the outbreak Republic of Transnistria receives Russian support through, inter alia, Russian troops presence (see Transnistria).

Defense cooperation with the USA and NATO

Romania remained a member of the Warsaw Pact until it disbanded in 1991. However, for most of the time, the country refused to participate in joint military maneuvers. The armed forces and the defense budget have since been sharply cut and the military duty was abolished in 2006.

Romanian military was dispatched to Afghanistan in 2001 to assist US-led forces and NATO force Isaf in the fight against Taliban violence and the al-Qaeda terrorist network. Following the US Alliance invasion of Iraq in 2003, Romania sent soldiers and military police. The force was taken home in 2009.

With the United States, Romania signed a defense agreement in 2005 that gives the United States access to several military bases, including an air base, in the eastern part of the country. The US Navy is allowed to utilize a military port area in Constanta. Romania has been accused of allowing the US intelligence service CIA to use a Romanian base for its transport of “suspected terrorists”, but it has been resented by the government of Bucharest.

In April 2014, Romania decided to raise defense appropriations from 1.36 percent of gross domestic product (GDP) to NATO’s 2 percent of GDP by 2017. The decision was made as a result of the tense situation in the immediate area, especially after the Russian annexation of Crimea.